The invasive niche, an interdisciplinary concept illustrated by gorse 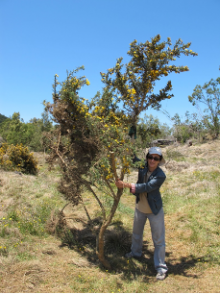 The categorization of a species as invasive, the spread of this status in the public sphere, and the vigor of the actions implemented to control it, depend on both ecological and socio-economic criteria. At the ecological level, a species can only establish in a new environment if it meets conditions compatible with its ecological niche. Similarly, we assumed that the invasive status can only spread in the public sphere of a given country under particular sociological contexts. This is what we aimed to test with gorse, a fast-growing bush originating from Europe, introduced in many different countries, and considered one of the "world's worst invasive species" by the IUCN. After studying the evolution of its life history traits and establishing its bioclimatic niche, we explored the socio-historical aspects related to its invasion. The relevant variables were calibrated by a fine study on Reunion Island, then collected at the global scale on the Web, in a standardized way. In all the countries studied, there were several public statuses attributed to gorse, including that of invasive species. We developed an indicator to quantify the publicization of the invasive status, and performed a multivariate analysis that combines natural and social explanatory variables. The results lead us to propose the concept of invasive niche, which is the set of natural and social parameters that allow a species to be considered invasive in a given socio-ecosystem.