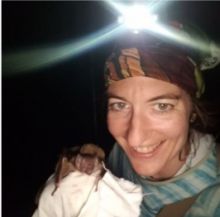 Link to seminar will be posted here

One long-standing question in evolutionary biology is why some phenotypes are frequently realized while other theoretically possible ones seemingly never are? This paradox has commonly been hypothesized to be caused by constraints on developmental processes that can bias or favor the expression of certain phenotypes. However, while this idea has received considerable interest as of late, it has never been demonstrated experimentally using a wide range of species, mainly because the eco-evo-devo field was lacking the tools to investigate variation of developmental programs in non-model organisms. To fill this gap, I use the dramatic diversity of bat teeth as a natural experiment.

I will first investigate if the existence of new developmental constraints can explain the diversity of tooth number and size found in Noctilionoid bats. Combining anatomical, developmental and modelling experiments on by teeth, I show that growth, by perturbing the Turing mechanisms, is sufficient to produce the variation of tooth number and size seen in Noctilionoids and established growth as a new rule for teeth and, more broadly, serial organ evolution. Then, I will study how the inherent structure of the tooth GRNs can both bias and facilitate evolution by testing if the modular structure of GRNs can explain both the conservation and the incredible diversity of molar shape seen in bats. To do so, by using integrative approaches mixing anatomical, developmental and modeling experiments, I plan to identify core and sub-modules of the tooth GRN and link them to morphological variation.

Through the development of two main questions, my research proposes an eco-evo-devo framework using the natural variation in bats as a starting point to theorize rules for the morphological evolution of species.